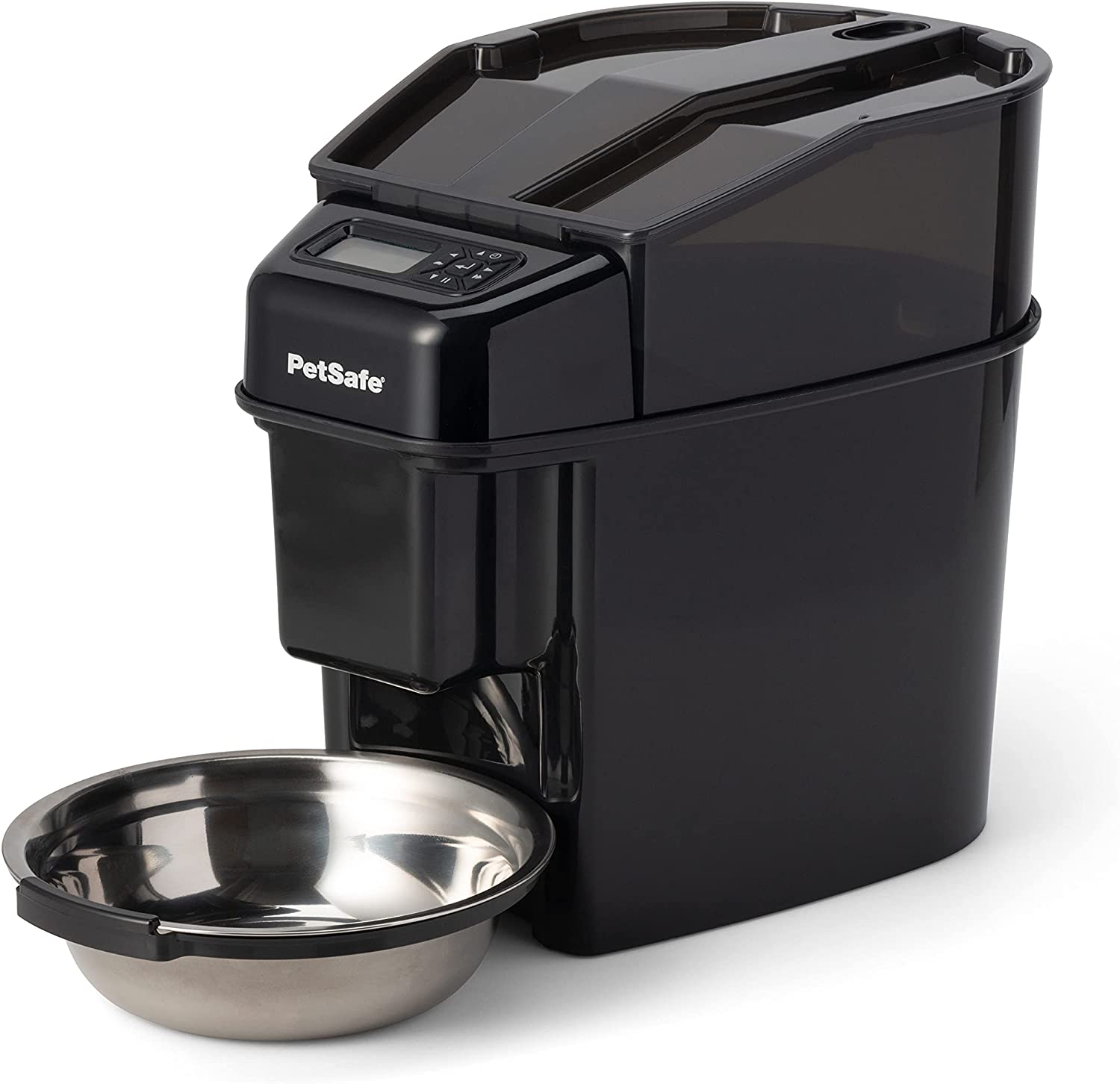 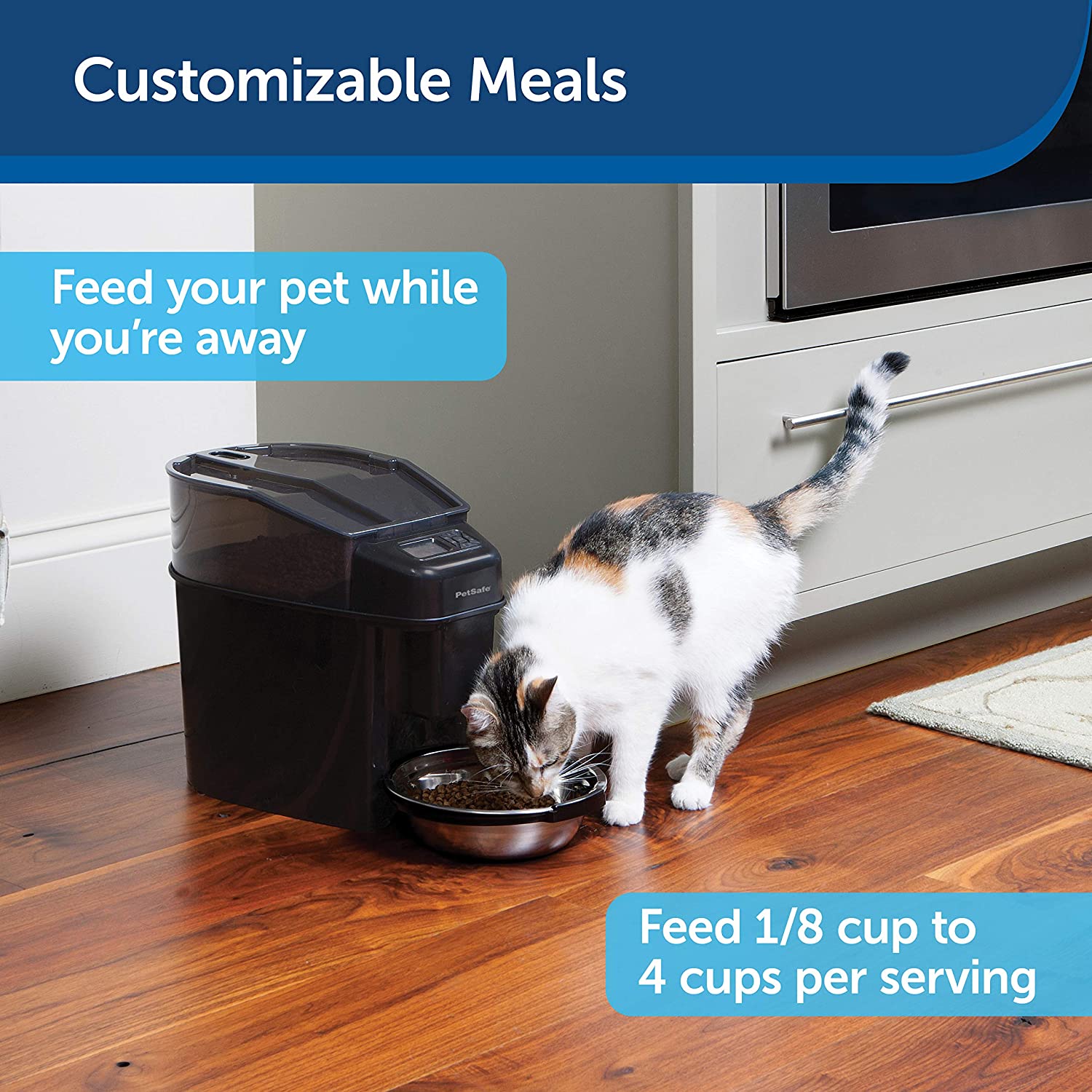 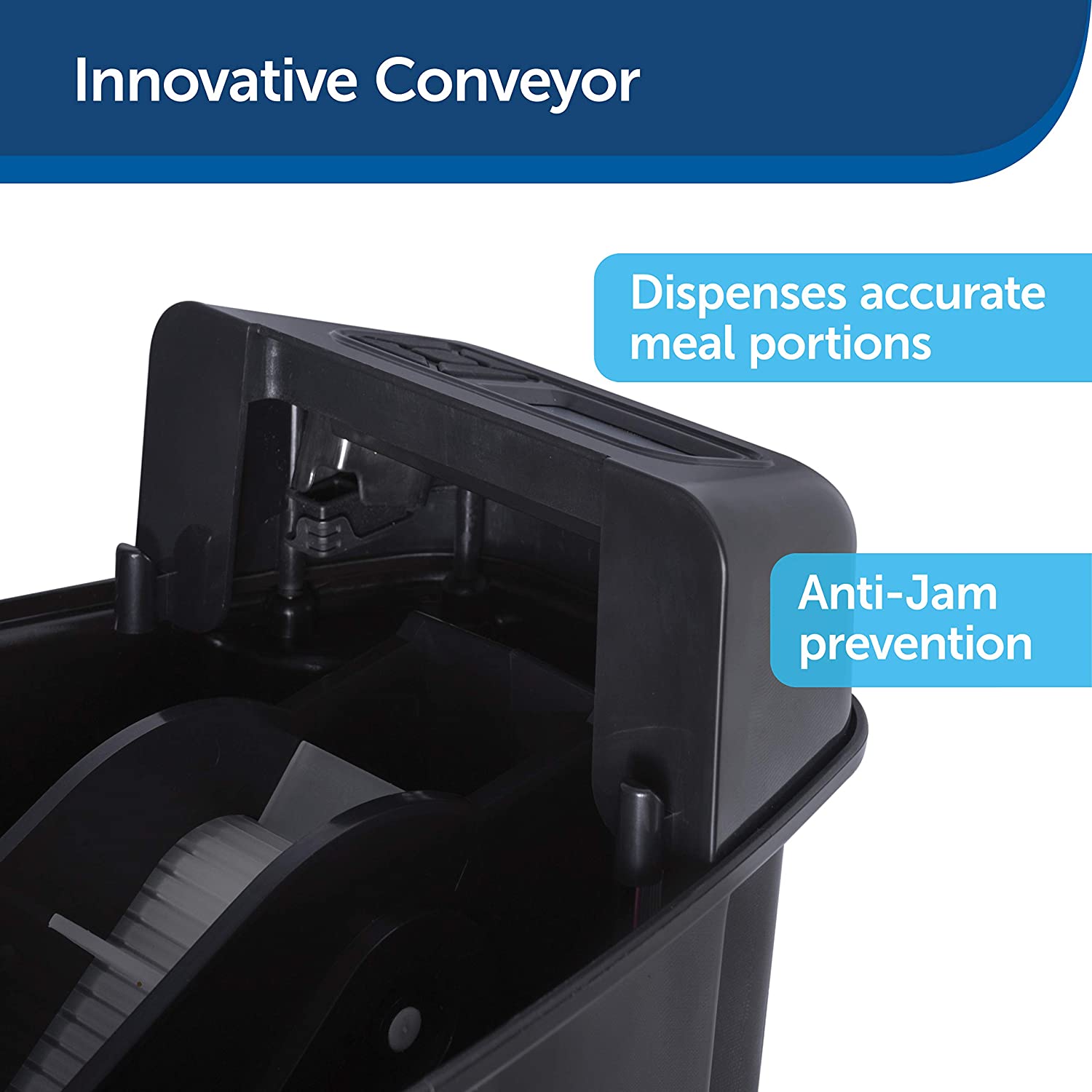 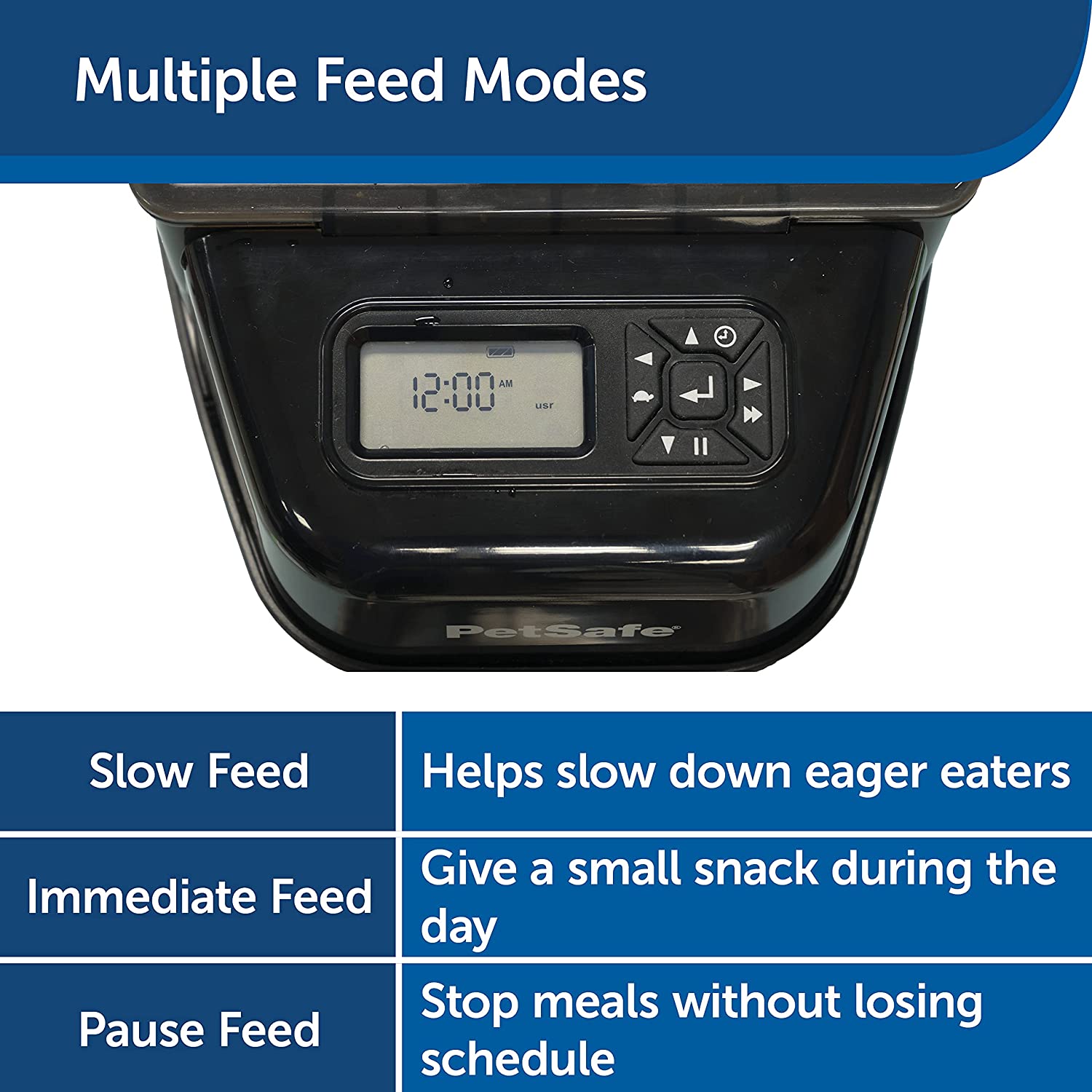 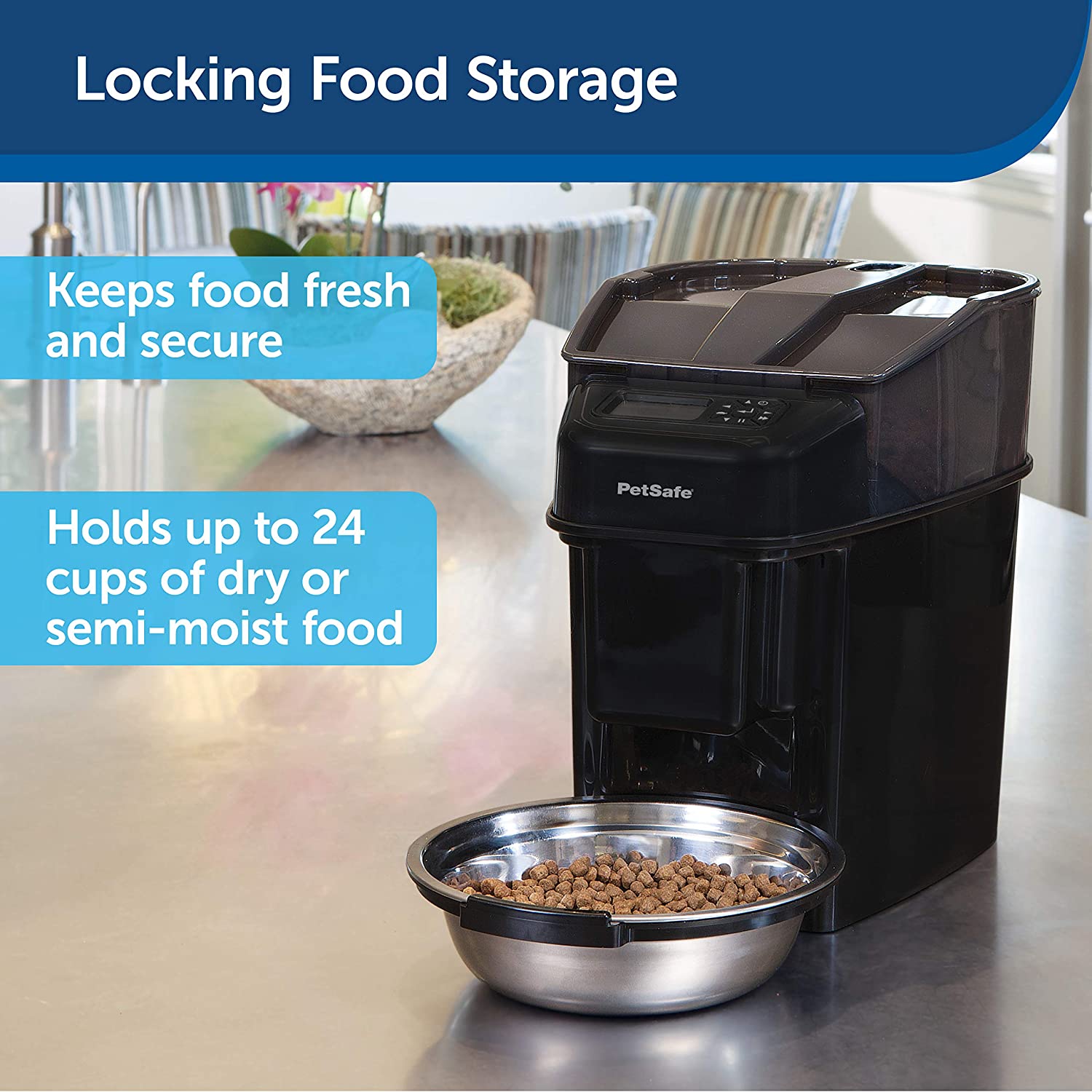 SCHEDULE YOUR PET’S MEALS: Conveniently schedule up to 12 meals per day for your cat or dog; best for cats and small to medium sized dogs
FLEXIBLE PORTIONS: Schedule 1/8 cup to 4 cups per meal depending on your pet’s unique needs; requires 4 D-cell alkaline batteries (not included) or power adaptor (adaptor sold separately)
WORKS WITH MOST KIBBLE: Feeder works with dry and semi-moist pet kibble that is up to 3/4 inch in diameter
SLOW FEED OPTIONS: For pets who tend to eat too quickly, schedule meals larger than 1/8 cup to slowly dispense over 15 minutes
PET-PROOF: The feeder is designed to keep prying paws from sneaking food before scheduled mealtimes
EASY TO CLEAN: Place the BPA-free plastic feeder parts and stainless-steel bowl in the top-rack of the dishwasher for easy cleaning; hand wash the conveyor system separately
QUALITY GUARANTEED: PetSafe brand has been a trusted global leader in pet behavior, containment and lifestyle innovations for nearly 30 years; we help pets and their people live happy together

Say goodnight to your early morning wake-up call. With the PetSafe Healthy Pet Simply Feed schedule your pet’s meals, so they are fed on time, every day of the week (including sleep-in weekends). The Healthy Pet Simply Feed holds 24 cups of dry or semi-moist food and dispenses it y using a unique, conveyor system. You can schedule up to 12 meals daily from 1/8 cup up to 4 cups per meal depending on your dog or cat’s needs. The feeder portions the meals for you so you can easily manage your pet’s weight to keep them healthy. The Slow Feed feature is great for pets that are fast eaters. With this feature, the feeder will slowly dispense meals larger than 1/8 cup over 15 minutes. Simply press the Feed Now button on the feeder, to dispense a meal earlier than scheduled. The Healthy Pet Simply Feed has a pet-proof design to keep prying paws from sneaking food. The feeder is easy to dissemble when it is ready to be cleaned – simply place the feeder and stainless-steel bowl in the top-rack of your dishwasher and hand wash the conveyor system. PetSafe brand is here to help you and your pet live happy together. 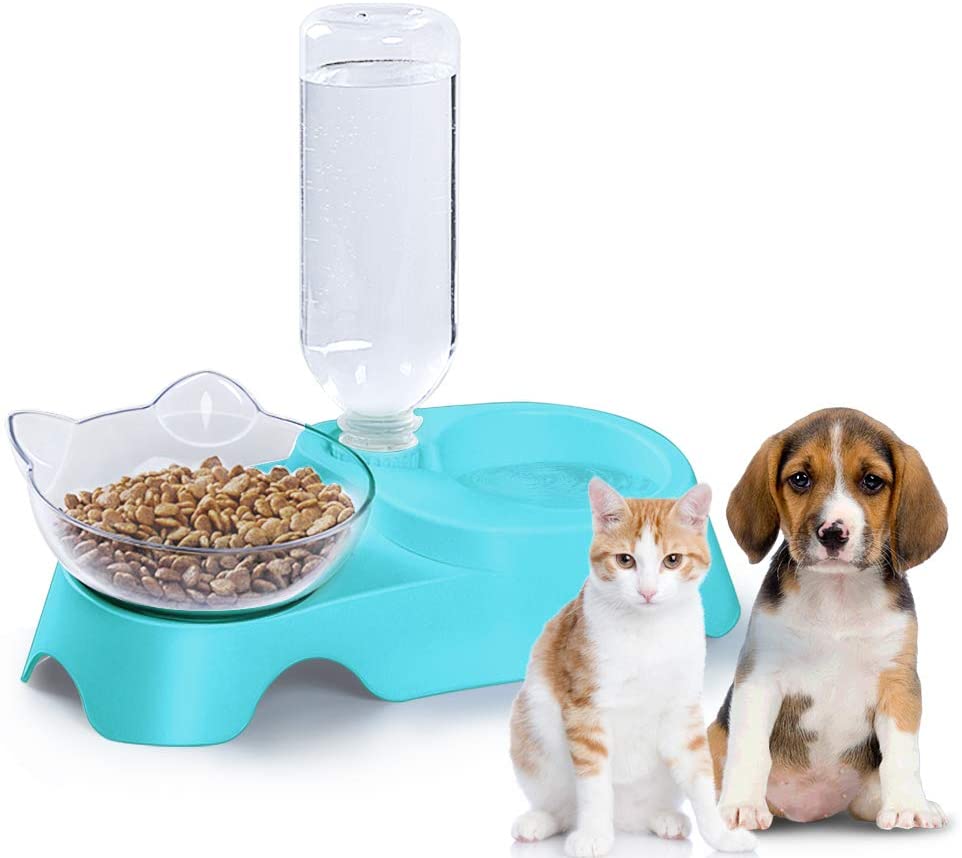 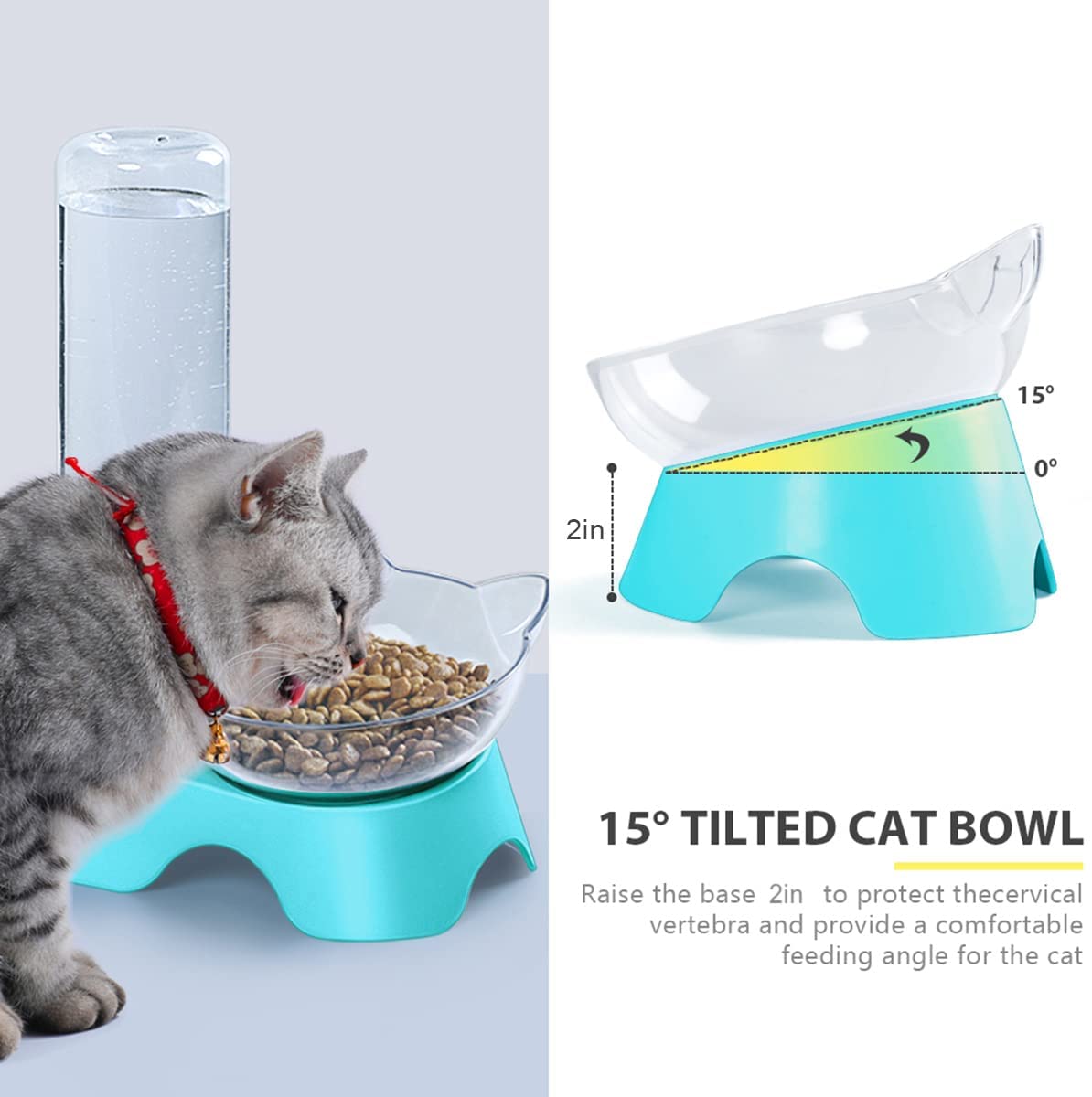 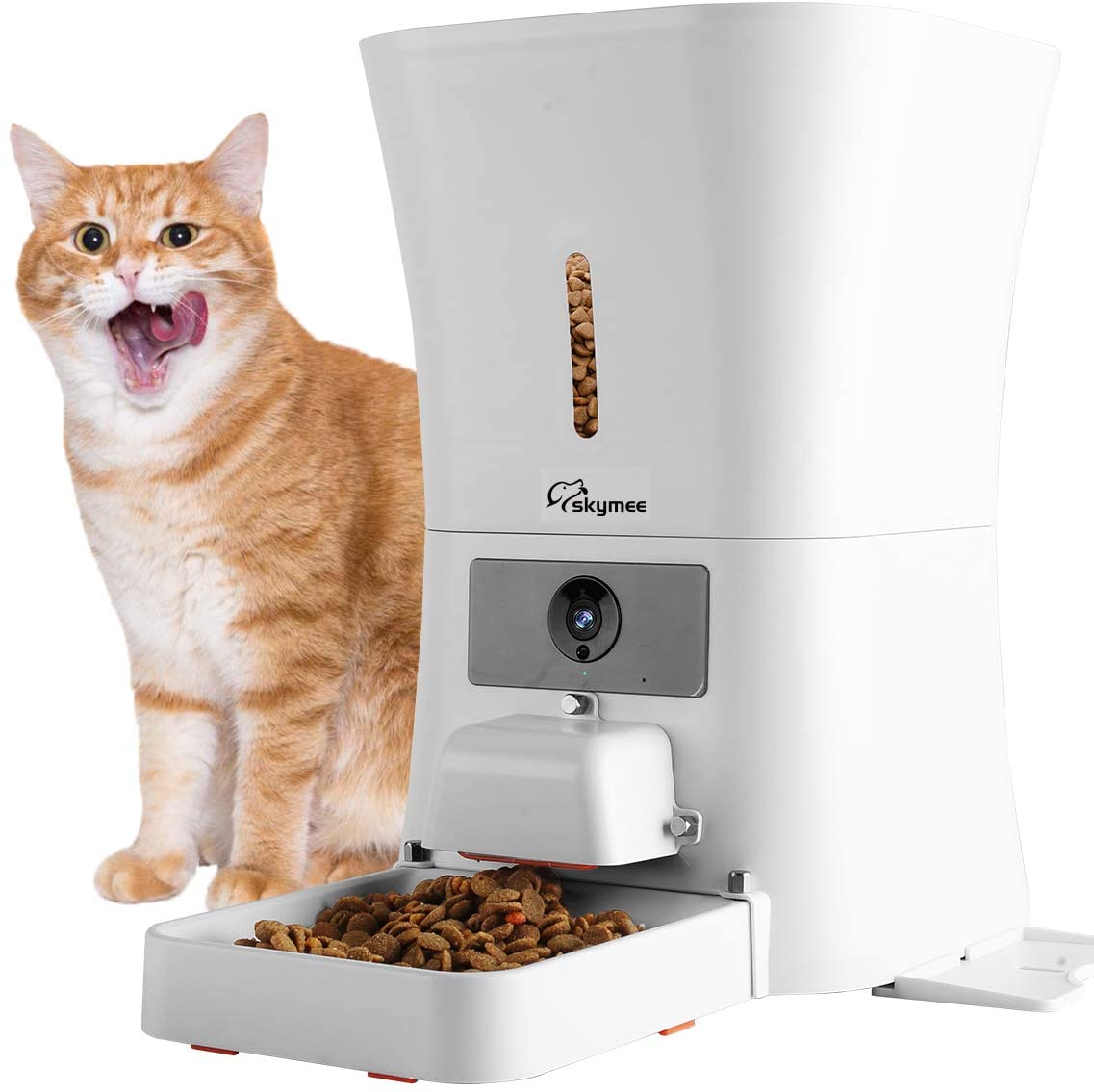 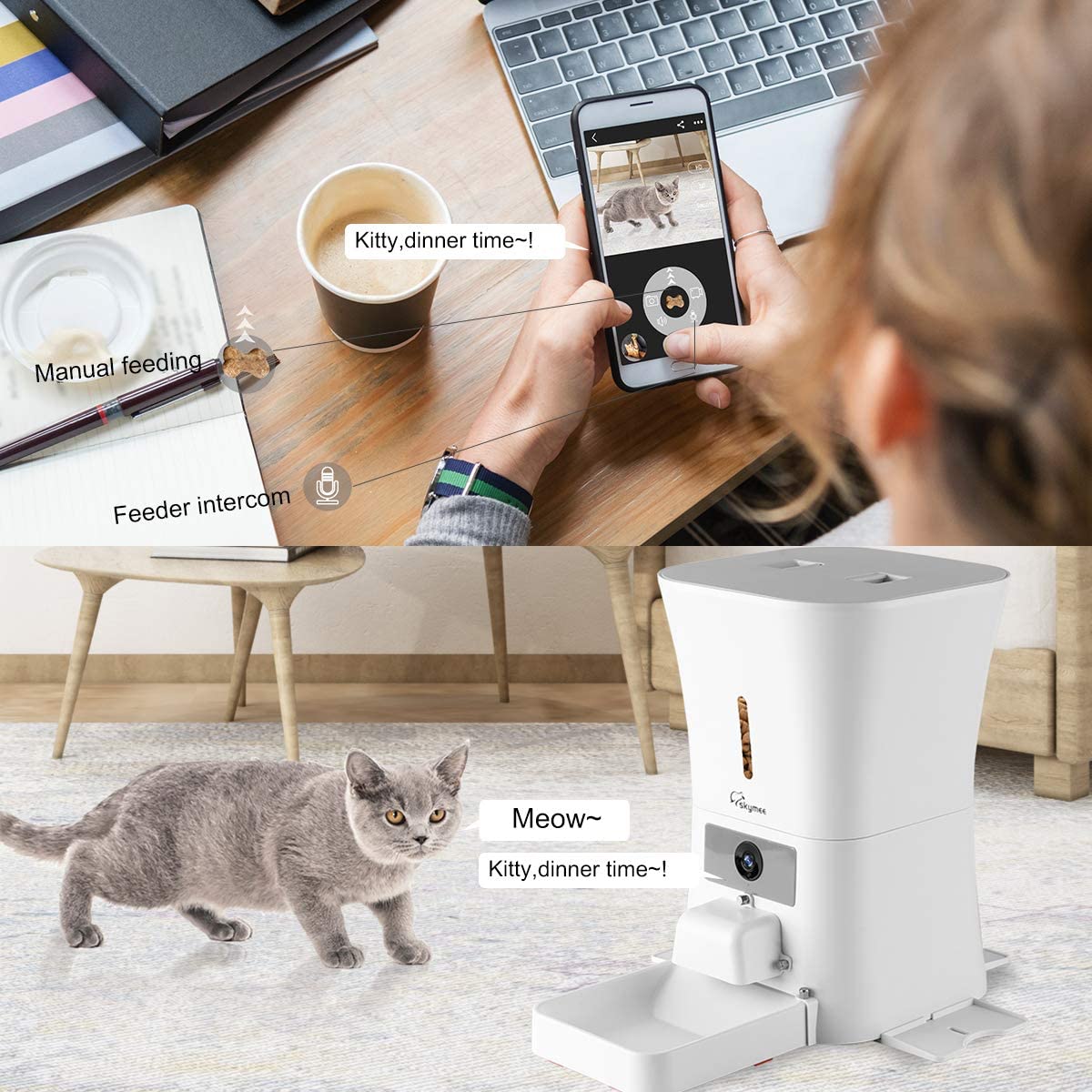 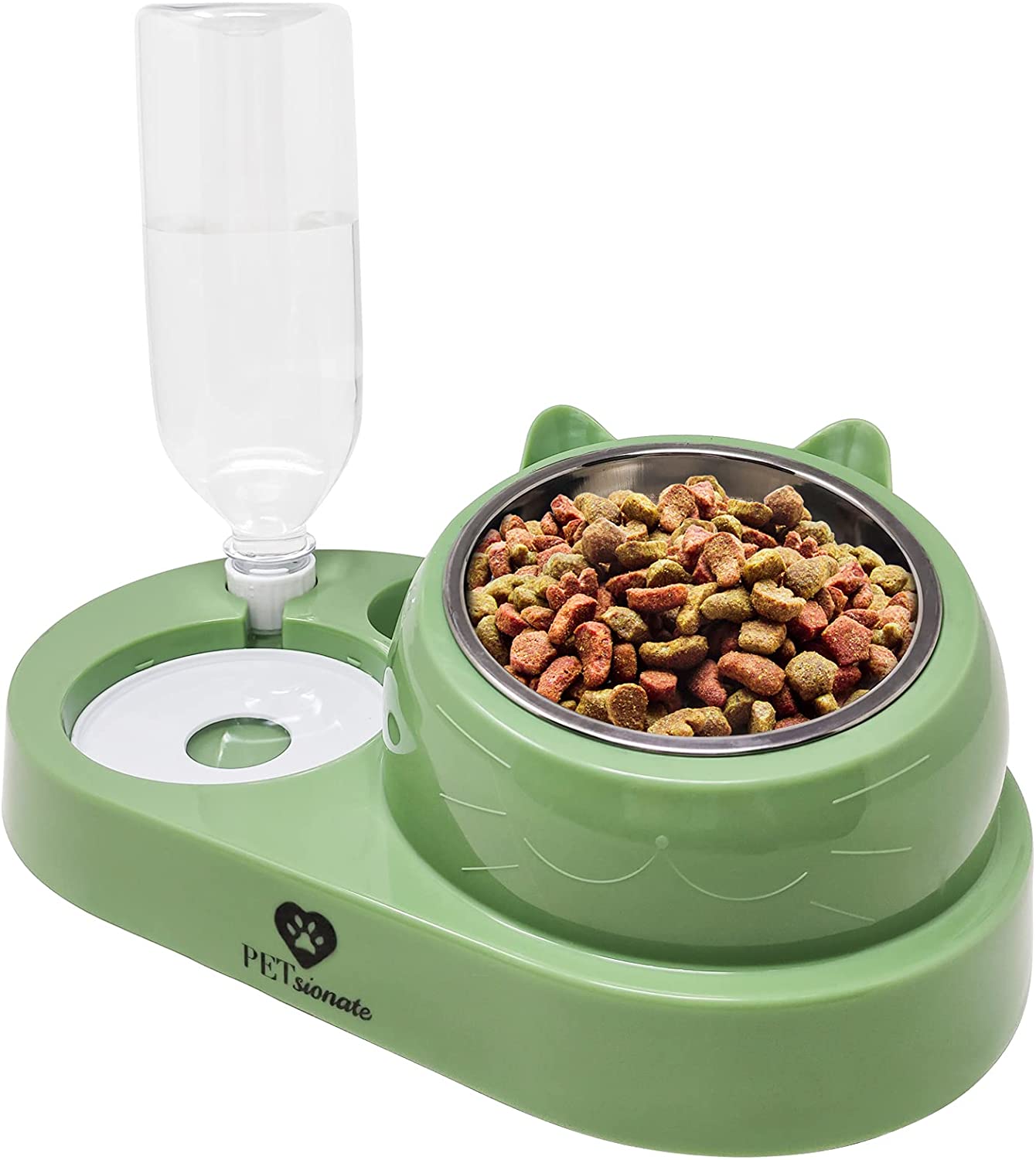 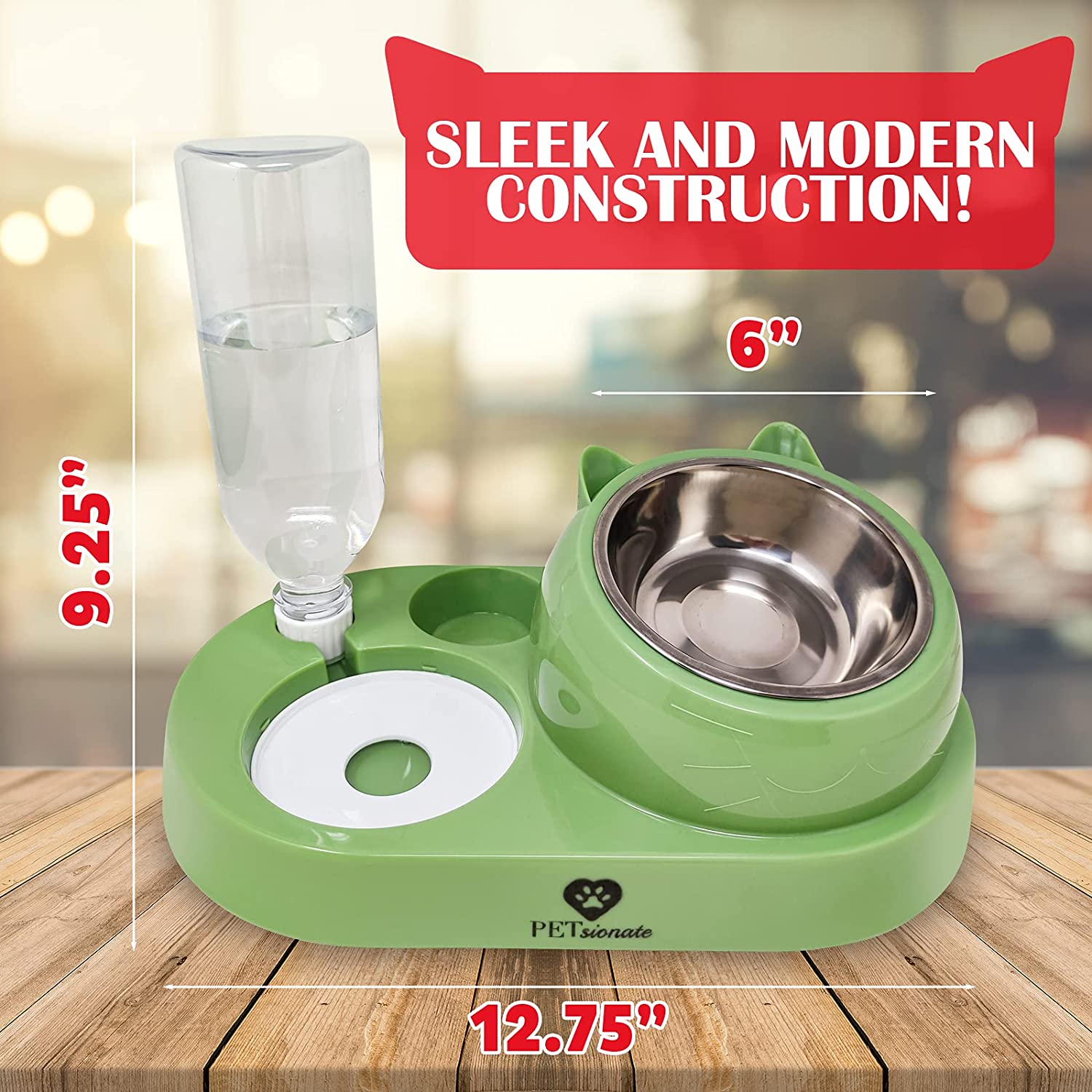 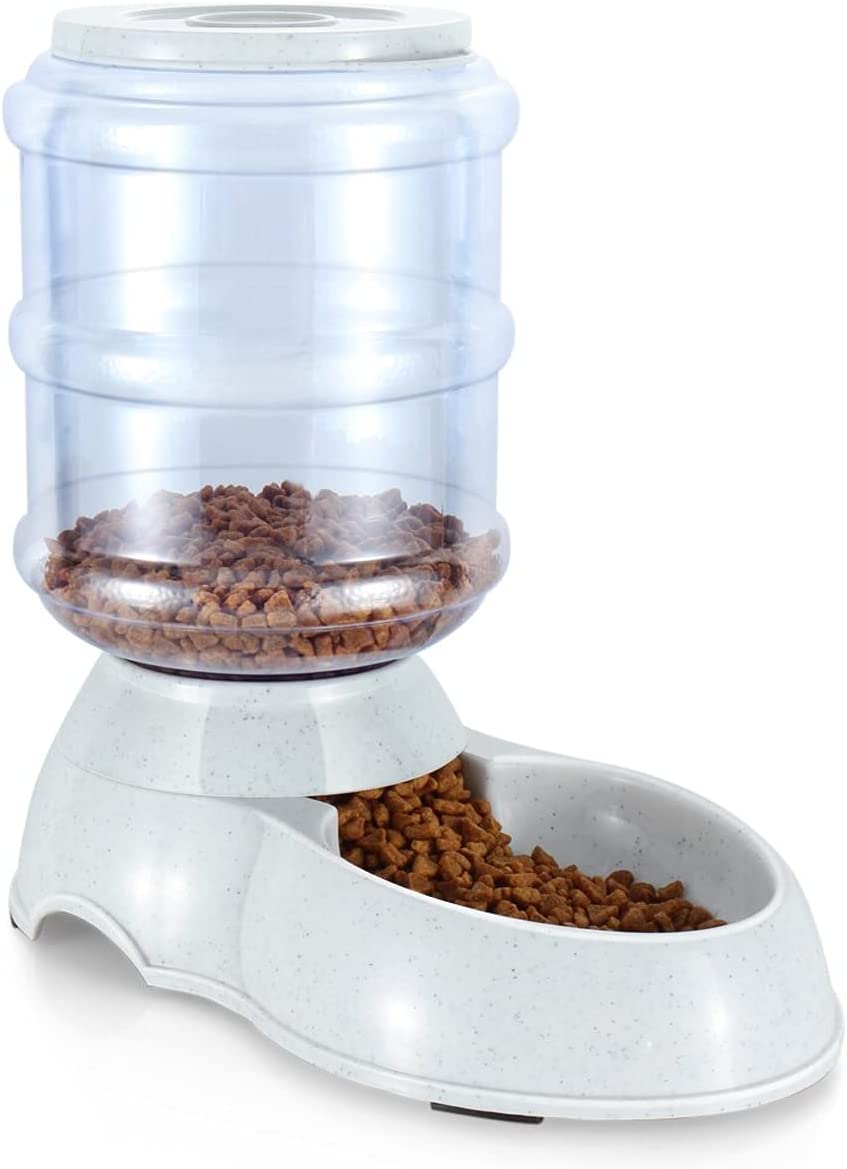 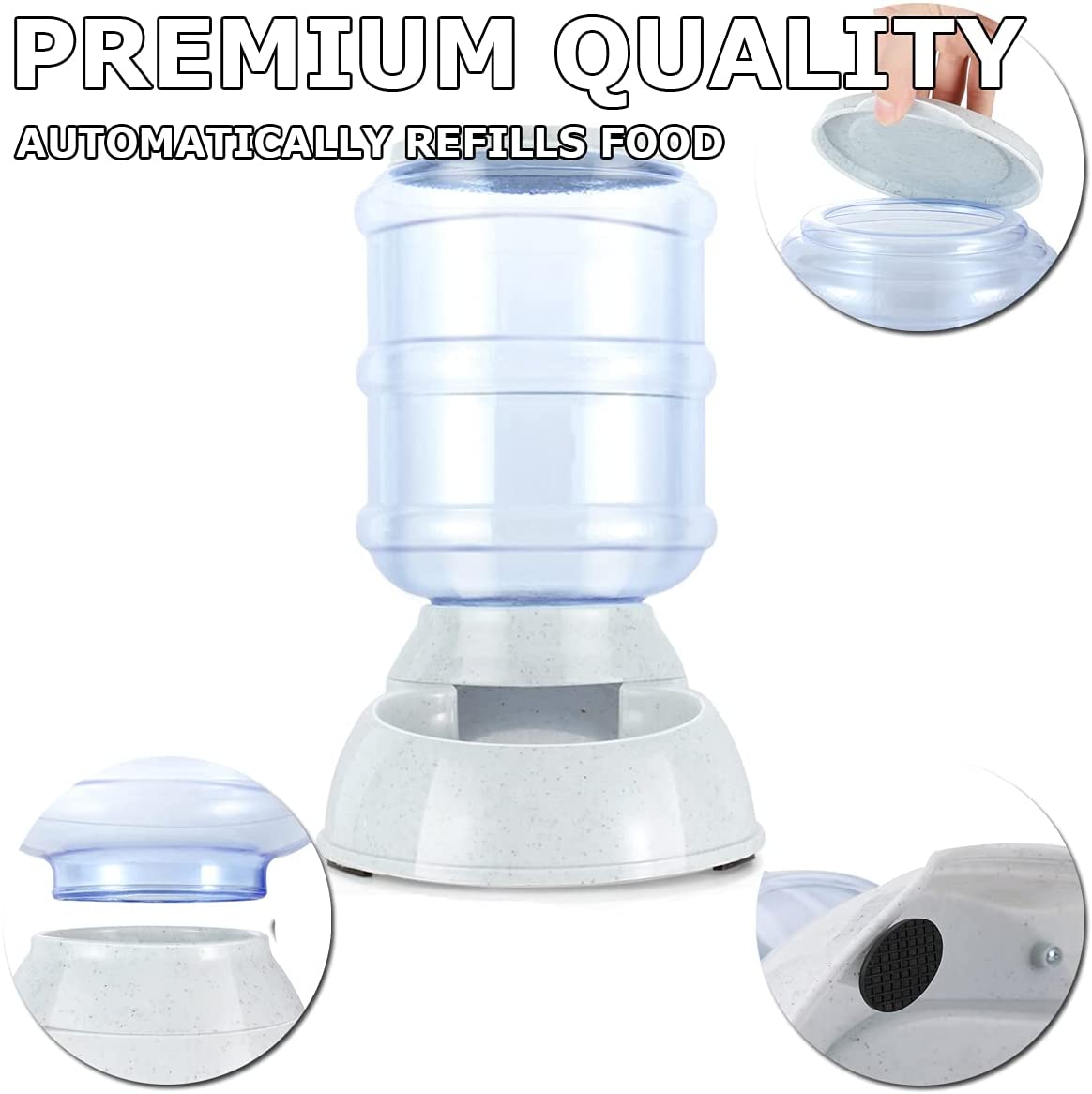 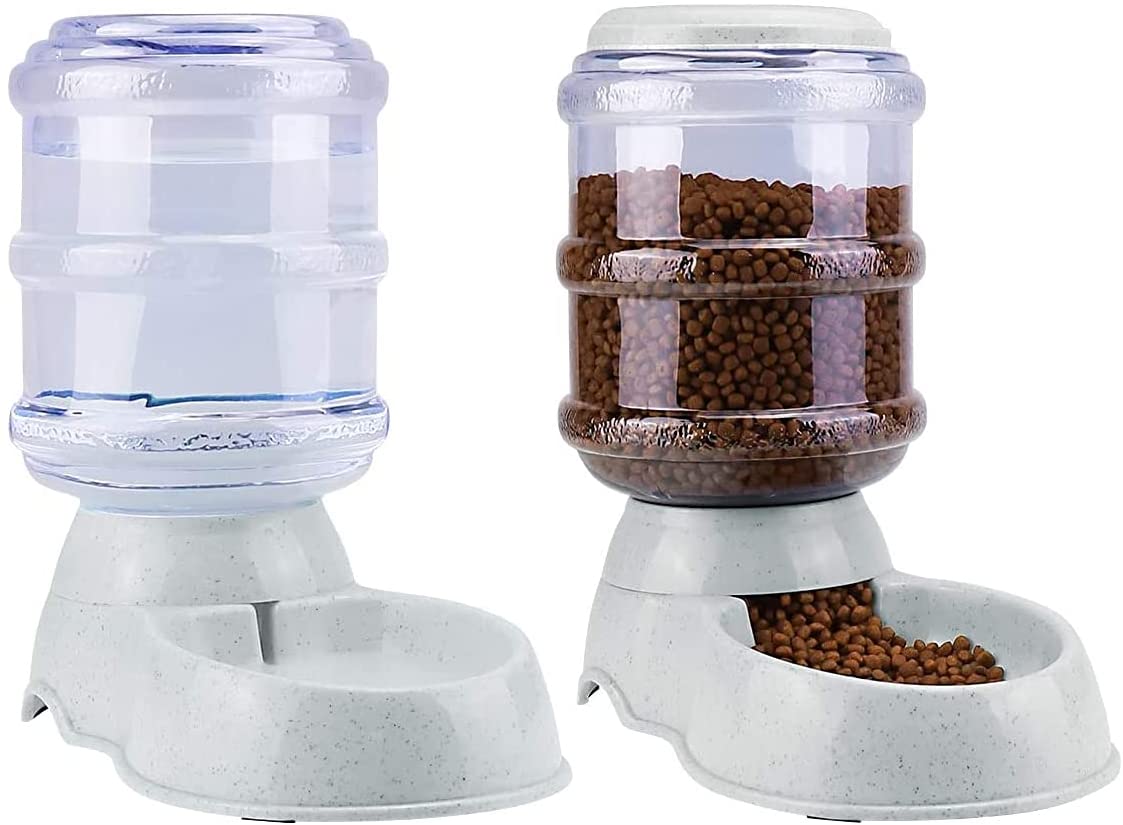 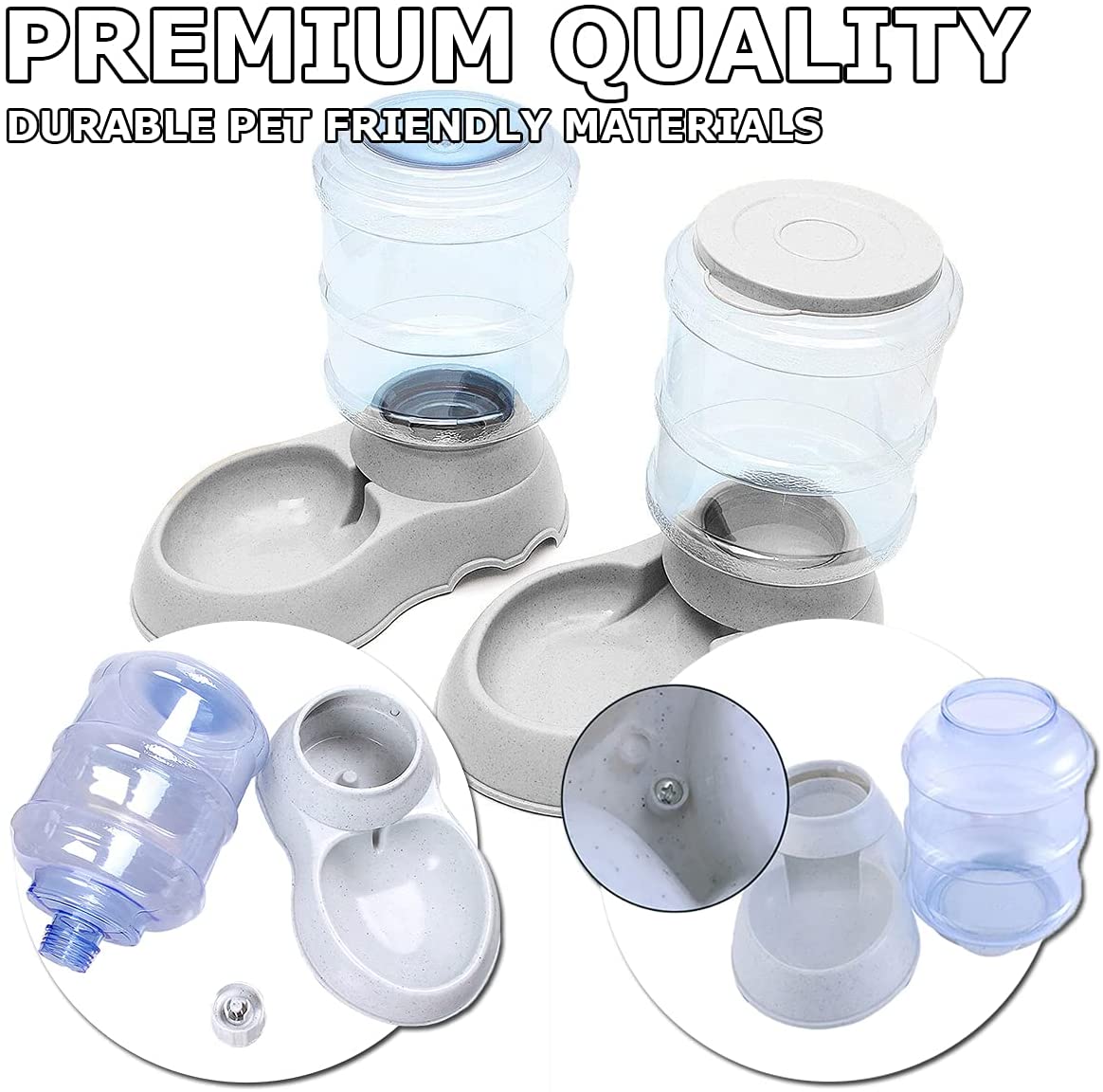